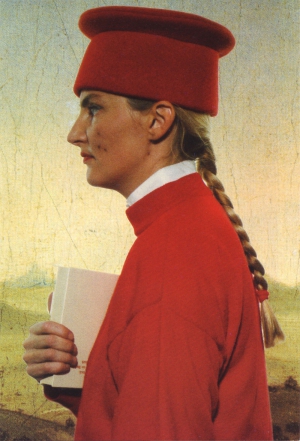 I happened to have bought the red hat which immediately made me think of the famous painting by Piero Della Francesca. We asked photographer Dirk Braeckman, then still relatively unknown, to make a portrait as a homage to one of my favourite artists. Dirk wanted to do it, but there was to be no mention of his name on the postcard as he doesn’t usually work to commission (except of course for King Albert and Queen Paola years later!).

The portrait was made in his studio, but to integrate the background into the photograph (a section of Piero’s painting), Dirk had to go to a specialized studio in Paris. It was 1992, Photoshop was still very much in its infancy, and he knew a company which specialized in this technique. I still remember the bill we received for that spot of photoshopping! And to think that these days anyone with a computer and a graphic editing programme can do it…

I am holding the book by the painter A.R. Penck: ‘Ich bin ein Buch, kaufe mich Jetzt’. We used that same book for several other New Year cards as an inside joke.