The terms “analogous architecture” and “old-new architecture” are key aspects of the teaching of Miroslav Šik at the ETH Zurich. During his first period there (1983–1991), Šik worked as Senior Assistant at the Chair of Fabio Reinhart and was in effect the spokesman of an architectural movement that became renowned far beyond the borders of Switzerland and is still influential today. In 1986/1991, the compact movement presented itself to the public with a touring exhibition and an accompanying large-scale “Swiss Box”, including chalk perspective drawings of its projects. Miroslav Šik worked as a Full Professor at the ETH Zurich between 1999 and 2018 during his second period there. Since the 1990s, Šik’s theory and teaching have formed an important pillar of Swiss and international architectural history.

This extensive volume contains the best 90/120 works respectively by students from both periods of Miroslav Šik’s teaching, including plans, project descriptions and perspective diagrams. Some of the presented students went on to become renowned contemporary Swiss architects. This volume also includes the most important manifesto-like texts by Miroslav Šik and enlightening essays on the movement of analogous and old-new architecture. 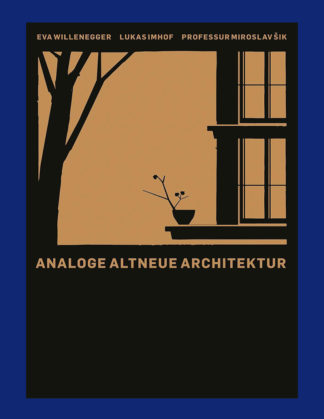