The adventure of the avant-garde group Superstudio begins in 1966. The group leads its members to speculate about ways to inhabit our “round and spinning” Earth. Superstudio Migrazioni offers a new look at the group’s oeuvre, which Germano Celant described as “radical”. More than an exhibition catalog, Superstudio Migrazioni presents three parallel but complementary explorations – through text, image and archive – of this collective journey that explored the boundaries of architecture. Initially, Superstudio’s architecture was ‘super’ and fundamentally realistic, making ironic and critical use of prevailing consumption and production mechanisms. Later that architecture evolved towards ‘the things, the body and the earth’ and eventually left all materiality behind. What remained was a purely symbolic dimension and union with life. The rich selection of images, works and documents in Superstudio Migrazioni carries the potential for multiple readings and interpretations of the group’s intellectual, architectural and poetic migrations. The first book is a collection of critical essays and interviews with three prominent figures in architecture who have been in close contact with Superstudio over the past 50 years; By examining their personal and theoretical careers, these different voices show the great influence of the small group, bringing to life this “journey to the higher realms of reason.” The second book proposes a thematic journey through the work: it shows the rich iconography through a series of concepts from Superstudio’s vocabulary. They reveal the richness of the projects and images produced over the active years of the group that go beyond the narrative contained in some of the quasi-iconic photo collages. The last book presents previously unpublished letters from the archive of Adolfo Natalini. The exchanges between the members of Superstudio and the letters to prominent architects from the second half of the twentieth century form a collective autobiography in which architecture and life increasingly converge. In addition to the group’s oeuvre, the publication also presents work by 9999, Archizoom, Hiromi Fujii, Hans Hollein, Arata Isozaki, Rem Koolhaas, Ugo La Pietra, Leonardo Ricci, Aldo Rossi, Leonardo Savioli, Ettore Sottsass Jr. and Bernard Tschumi. 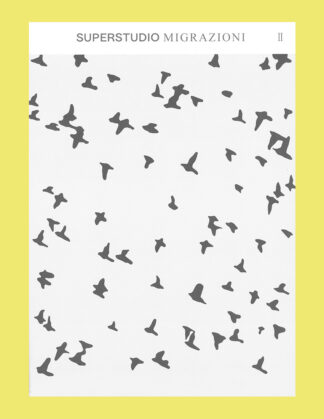