From poems to statements and lectures, the writings of postminimalist virtuoso Richard Tuttle possess the same instinct for materiality and delicacy as his art. Over the course of more than 50 years, American artist Richard Tuttle (born 1941) has invented new possibilities of scale and humor, sometimes adding almost nothing to an object, at other times recklessly heaping up his materials or pressing them to the brink of compositional incoherence. With just the same sensitivity, humor and nuance, Tuttle has also composed numerous texts, mostly in response to specific commissions and publications. Tuttle does not approach writing as a transparent communicative medium, but rather as simply another material. Beautifully designed, as Tuttle books always are, A Fair Sampling brings together a selection of the artists writings published in exhibition catalogs, books and newspapers, as well as hitherto unpublished texts. These include not only reflections and commentaries on art and drawing, but also tributes to artist friends, including various texts on Agnes Martin, travel notes, poems and lectures that Tuttle delivered in various institutions. 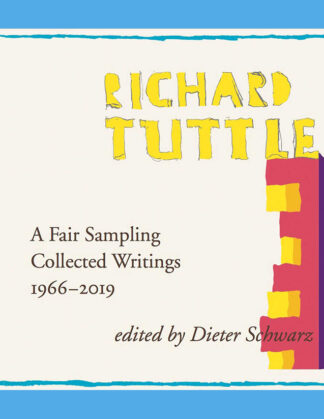