An artist’s book by Richard Prince that looks back on a 25-year body of work.
Created by the artist Richard Prince (born 1949) in parallel to a major survey show, Hoods is both a monograph and an artist’s book focused on a celebrated collection of painted sculptures made from 1988 through 2013. Archival photographs in the book document the evolution of the Hoods, cataloging both the artworks and Richard Prince’s mythical “Body Shop” and the destroyed “Second House” in Upstate New York.
In an interview with photographer Larry Clark, Prince stated that “With the Hoods, I wanted to paint something that was already painted.” From this simple act of conceptual appropriation, Prince evolved a massive body of work that engages deeply with the vernacular design tradition of the customized American muscle car. Taken all together, the sculptures, the upstate Body Shop and Prince’s own photo-documentation evoke both ambiguous nostalgia as well as feelings of absence and loss, perhaps best expressed in a sampling of the artwork titles: Almost Grown; American Place; Folksongs; Vanishing Point. 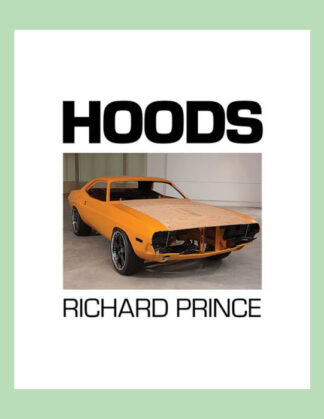