Artist Mel Bochner became a writer, he says, almost by accident. In 1965, as a young artist in New York, he was out of a job; Arts Magazine paid him $2.50 for every review he turned in, whether they published it or not; a month of review-writing paid his rent–$28.00 a month. His reviews and articles provoked a range of unexpected reactions. “At that time, artists who wrote were looked at suspiciously, as if writing somehow tainted their visual practice,” he writes. A painter friend attacked him publicly for “joining the enemy.” Bochner soon began testing the boundary between writing-as-criticism and writing-as-visual-art. Solar System & Rest Rooms collects both Bochner’s writings on art and his writings as art, offering more than fifty pieces– reviews, art criticism, theoretical texts, interviews, catalog statements, notecards, and his groundbreaking “magazine interventions”–many reproduced in facsimile.

Bochner is a leading figure in conceptualism; his 1966 installation at the School of Visual Arts Gallery Working Drawings and Other Visible Things on Paper Not Necessarily Meant to Be Viewed as Art is considered to be the earliest exhibition of conceptual art. Solar System & Rest Rooms chronologically documents the work and ideas of this important artist over a span of forty years, as well as providing a unique perspective on the conceptual and post-minimal art scene in New York. This book offers a rare insight into what it means to be an artist whose visual practice is inseparable from the sustained practice of writing. 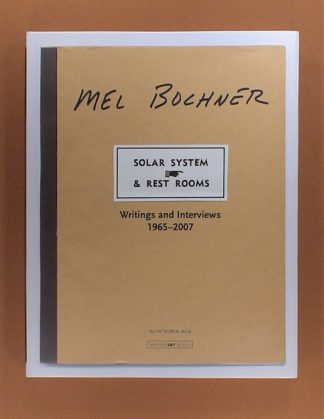