For her project for the French Pavilion, Laure Prouvost has imagined a liquid and tentacular environment, questioning who we are, where we come from and where we are going. Tinged with utopia and surrealism, the project discloses an escapist journey, both tangible and imaginary, towards an ideal elsewhere. The exhibition takes the form of an invitation to melt into the different unveiled and shared realities intermingling here, and challenges the representation of a fluid and globalized world, made of exchanges, connectivity, and discrepancies.
In the continuation of her artistic practice, which intertwines representations of desire, oneirism, and a fantasized description of nature, Laure Prouvost focuses on language, word play, and translation. The attention given to her environment and to the natural and human elements that surround her calls to mind the immersive quality of her films, installations, objects, drawings, and tapestries. The contexts of Venice—a floating city built on water and by water, a city of facade and backstage—and of the Biennale, through the notion of representation, both appear as sources of inspiration.
The cornerstone of Deep See Blue Surrounding You / Vois Ce Bleu Profond Te Fondre is a fictional film. It takes the form of an initiatory journey filmed over the course of a road trip on horseback through France—from the Parisian suburbs to the northern region, from the Palais Idéal du Facteur Cheval to the Mediterranean Sea—and, finally, to Venice. A sculptural installation, taking as a metaphorical point the trajectory of the octopus goes beyond the film, transcending out of the realms of the Pavilion and beyond. It uses typical processes of the artist’s practice such as leftover objects from the film, resin, clay, glass, plants or water vapor, and features performances interacting with the architecture and the objects. Lâchons les chevaux Et avec vous on tombera des nues.
A monograph accompanies the exhibition, taking the form of an atlas exploring and deepening Laure Prouvost’s artistic practice. 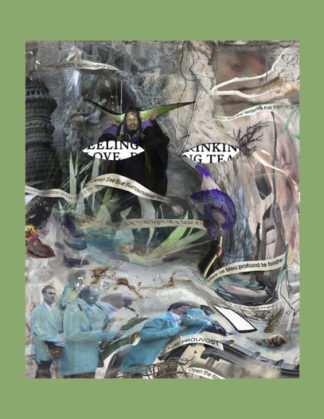