In ‘Landscape in diversity. Belgium and the staging of the picturesque landscape in the nineteenth-century album and book ‘, picturesque art is once again mapped out in its full breadth. This is done on the basis of material never used before, collected in an unusually rich private collection of mainly lithographic albums and illustrated editions from the first half of the nineteenth century. The picturesque landscapes and sites depicted (and constructed) therein were experienced by the public as a world with great vibrancy. ‘Picturesque’ stood for interesting, expressive and curious, for original, charming and bizarre, for typical, folkloric and spicy. The picturesque reality had cachet and character, relief and local color. It originated in fantasy, which in turn stimulated it. Her antonyms were no less clear: what was not ‘picturesque’ was colorless and tasteless, was banal.
The picturesque landscape, this book shows, could take many guises. The banks of the Maas were picturesque, as were the old Flemish cities. The picturesque look focused on waterfalls, caves and rocks, on ruins of abbeys and castles, but also – more surprisingly – on the factories and other industrial sites of young Belgium. It was a landscape that could be discovered on foot, in a solitary and adventurous journey, full of surprises. But it could just as well be explored by train, in a more comfortable way, or in the intimacy of the living room, where the inhospitable Semois, the ruins of the abbey church of Villers or the lighthouse and harbor of Ostend could be found in albums or travel reports, sometimes made by hand. admired. The landscape lithography of publications with titles such as Collection choisie de voyages pittoresques or Promenades sur le chemin de fer forms the core of this book. IN DUTCH! 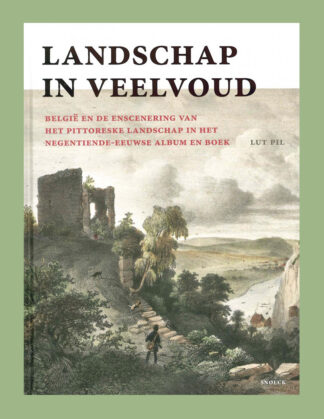