Kiosk in the City is the end result of an extensive study by Jacques Beljaars and Thomas Rouw into the urban development, architectural and urban sociological value and significance of the sales kiosk. This widely accessible work tells about the history, diversity and embedding of the kiosk in the urban architectural and sociological context. The chronologically ordered text, about the history of the kiosk, is told on the basis of important social, sociological and urban developments. This essay shows how there has been social thinking about street trading during the past century and a half. Sometimes kiosks were taken for granted as part of the fabric of a city, but in the ’70s and’ 80s of the last century they became synonymous with the impoverishment of the inner cities. This led to strong government regulation and often to the removal of the kiosk from the streets. In recent decades there has been more appreciation and the number of kiosks in the big cities is increasing again.
As a whole, Kiosk in the City provides a picture of the spatial and social scale of the phenomenon of the kiosk within the urban environment. IN DUTCH! 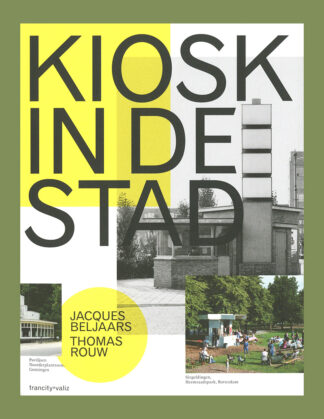