The internationally renowned Belgian architect Jan De Vylder (b. 1968) has an obsession for drawing.
In the 30 years of his architectural career, he has filled hundreds of sketchbooks with architectural ideas, landscapes, clouds, bottles and countless doodles.

The energy of the restless artist pops up from the pages. Browsing through the different sketchbooks, it’s as if De Vylder is constantly on the move. Indeed, the architect travels a lot and spends time on the airplane filling his Moleskines with unmatched tenacity. Traveling between Belgium and Switzerland, an air hostess once asked the architect if he was really alright. With his blue, red and green Bic he was scratching the paper so hard that he cut through it. Some of his fellow passengers wondered whether he was going mad.

Posture Editions publishes a volume with a selection of 150 double page spreads from these sketchbooks, revealing the visual artist inside the architect Jan De Vylder. The sketches are somewhat similar to those made by other architects because of the speed with which they were made and the explanatory context that characterizes most sketches by architects (Aldo Rossi, Alvaro Siza, Juliaan Lampens, Le Corbusier…). However, the specific character of De Vylder’s drawings lies in the almost nonsensical repetition of the grammar of forms that seems to inspire him and after a while becomes autonomous and sovereign.

With long legs, Jan De Vylder stands on the two different rocks of art and architecture, and underneath this natural bridge the water flows blue, red and green with a vitality that causes the viewer to experience a mood of happiness. 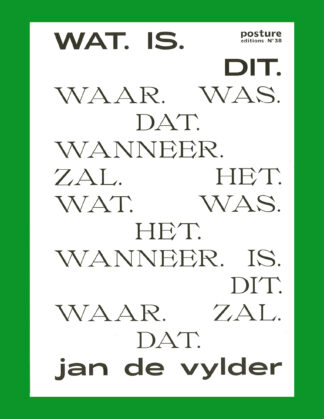