Hitoshi Abe (b.1962) is widely considered to be one of the most interesting among the new generation of emerging Japanese architects. After graduating from the Southern California Institute of Architecture, he worked in the Los Angeles office of Coop Himmelb(l)au before obtaining his PhD from Tohoku University and setting up his own practice, Atelier Hitoshi Abe, in Sendai, Japan. Since the practice was established in 1992, Abe has won a wide variety of commissions across the country. He has also taught at several architecture schools, including the Tohoku Institute of Technology, the University of California Berkeley, and the University of California Los Angeles, where he is currently Chair of the Department of Architecture and Urban Design.

This is the first monograph on Hitoshi Abe to be published in English. It features 26 projects realised in the last 15 years, covering a broad range of building types. Projects include Miyagi Stadium, Reihoku Community Hall, Kanno Museum, Yomiuri Media Miyagi Guest House and the F-town Building. Written by Naomi Pollock, an authority on Japanese design and architecture, this book is an essential reference work on this promising young architect. 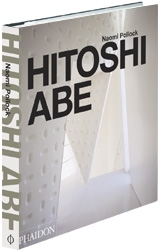