The long-awaited fifth volume on the complete works of Herzog & de Meuron presents the sixty projects completed between 2002 and 2004 with characteristic attention to detail.

These include buildings that have already become contemporary architectural icons, such as the National Stadium in Beijing and the Elbphilharmonie in Hamburg, but also projects which, though never realized, have influenced the architectural discourse. These include the residential tower for the Schatzalp Hotel, which overlooks Davos and inspired a new generation of Alpine architecture.

In the period covered by this volume, urban planing was a major focus of Herzog & de Meuron’s work. The architectural boom in China gave birth to plans for entire urban districts. Masterplans for Burgos and the Olympic Games in London also opened up entire urban regions to future development.

Covering all 60 projects 2002 –2004, including the National Stadium in Beijing, the Elbphilharmonie, and the extension of the Tate Modern

With interviews and other rarely seen documents from the architects

More than 1000 photos, sketches and plans 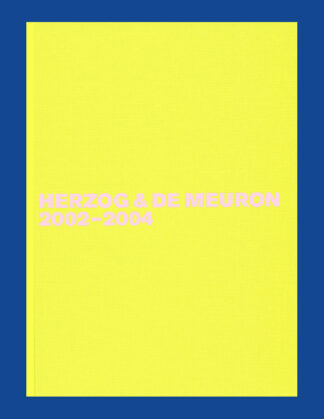