At first glance, the photographs in this series by Georg Brückmann (b. Frankfurt am Main, 1977; lives and works in Leipzig) might show distorted theatrical stage sets or gaudy interiors from a Biedermeier dollhouse assembly kit. His actual reference is to the Wittgenstein House at Vienna’s Kundmanngasse 19, and hence to the philosopher Ludwig Wittgenstein. Brückmann’s fictional rooms — he builds elaborate models and, in a final step, records them in pictures — bring the backdrops of Michel Gondry’s stop-motion films to mind. But rather than being otherworldly settings for fantastic narratives, they articulate a complex engagement with the methodology of the photographic medium.
May we read the Wittgenstein House as philosophy translated into stone? To what extent does its architecture reflect the philosopher’s theories? And what does the luxurious aesthetic of the building at Kundmanngasse 19 suggest about philosophy’s aspiration to be applicable to daily life? In his publication of the same title, Brückmann presents his playful adaptation of the structure, unfurling a multifaceted interpretation of the space in which Ludwig Wittgenstein thought and lived. The pictures are complemented by fictional conversations between Georg Brückmann and Ludwig Wittgenstein. With essays by Daniel Creutz, Christina Natlace and Heidi Stecker. 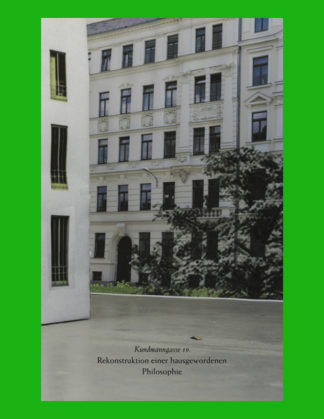