Written Matter presents selections from the notebooks of the prolific and celebrated artist Gabriel Orozco. These texts, sketches, and images from notebooks spanning 1992 to 2012 offer insights into Orozco’s artmaking process, revealing his thinking, methods, and rationales. The texts, translated from the original handwritten Spanish, offer personal truisms, compelling insights, observations, and notes on process and method, forming a subterranean stream that runs parallel to his artwork. “Art is the opposite of spectacle,” he writes. “Art does not try to convince anyone, that’s why it’s shocking.” The notebooks are fundamental to Orozco’s work, serving as a travelogue and personal dictionary that, when consulted, allow him to resume the trajectory of his thought anywhere. Because Orozco chooses not to work in a studio, his notebooks act as a different kind of studio space, on paper and bound between covers.
Orozco works in a variety of media—drawing, installation, photography, sculpture, video. His notebooks reveal and revel in the style and substance of his art.
Profusely illustrated and designed under Orozco’s art direction, Written Matter offers an unusually intimate look at an artist’s process and practice. 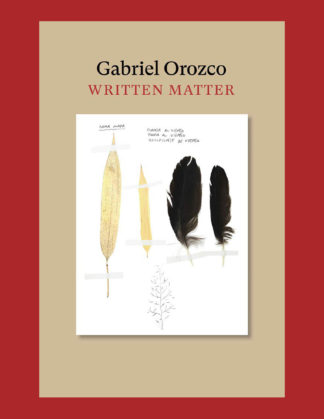