During his time as a student at London’s Central Saint Martins, Gibraltar-born British fashion designer John Galliano worked as a dresser at the National Theatre, learning the art of costume and the power of illusion. As a regular in London nightclubs, Galliano met a coterie of artists and colorful personalities, forging strong ties with kindred spirits who would play a decisive role in his career – among which Stephen Jones, who would become Dior’s milliner.

Following the success of his own brand (founded in 1984,) he was appointed Creative Director of ready-to-wear and haute couture at Givenchy in 1995, before joining Dior in 1996 as Artistic Director of the women’s collections. There, he distinguished himself with his extravagant shows that combined eclectic historical and cultural inspirations – a global kaleidoscope of references and unbridled inventiveness, imbued with romanticism and history. The designer’s sensitivity for haute couture know-how and innate sense of the spectacular has garnered him a reputation as a master of the silhouette.

John Galliano has truly reinvented the art – and the very role – of haute couture, redefining its tropes into a new type of contemporary fashion that combines the influences of his travels – whether real or born of his imagination – and the bountiful heritage of Christian Dior. This book highlights the exceptional silhouettes he created for Dior collection after collection from 1996 to 2011, through his most emblematic models, as photographed by Laziz Hamani, alongside shots by Steven Meisel, Annie Leibovitz, Irving Penn and Paolo Roversi. This singular odyssey is the fifth volume in a new series of books paying tribute to the House’s Artistic Directors. 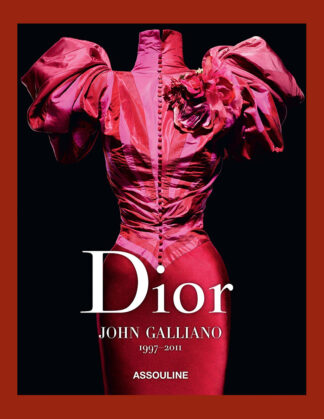