This instalment of ‘El Croquis’ is made up of two volumes featuring special selections of outstanding works and projects from two architecture offices. In the first volume are the works by Swedish architects Johan Arrhov and Henrik Frick of Arrhov Frick between 2015–2022. Also included is ‘How simple Can We Build,’ a conversation led by Ilka and Andreas Ruby, as well as an essay by Professor Philip Ursprung. The second volume showcases the works and awards of London-based architectural practice Groupwork between 2012–2022. Amin Taha, director of Groupwork is interviewed by Cristina Díaz Moreno and Efrén García Grinda in ‘Tectonics and History.’ 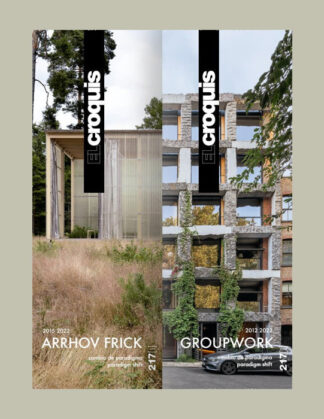