William Klein (1926-2022) was an American photographer, painter, designer, and filmmaker. New York-born, Klein settled in Paris in 1948, where he studied at the Sorbonne and pursued his artistic career working briefly under Fernand Léger. Best known as a photographer, achieving fame with a series of acclaimed photobooks, including Life is Good and Good for You In New York (1956) and through his fashion photography in Vogue magazine. Klein was also a filmmaker, directing both feature films and documentaries, a graphic designer, and art director.

Klein was one of the great image makers of the 20th century and one whose work remains an enduring creative influence on the work of contemporary artists, photographers, and filmmakers.
With over 250 images, this career retrospective explores the late William Klein’s entire creative and artistic arc. Directed by Klein himself, from the selection of content to book design, this large-format publication looks back at his uncompromisingly creative lifetime, showcasing Klein’s prolific and relentlessly innovative contribution to the world of photography, art, design, and filmmaking.
Published in association with a major retrospective at the International Center of Photography, this book is a comprehensive take on his career. While best known as a photographer who broke all the rules and conventions, William Klein: Yes focuses on the full range of Klein’s work, from his abstract paintings through to his startling, authentic street photography and photobooks and his dynamic, satirical take on filmmaking. With a flowing, chronological text by David Campany, this book will be both an introduction to William Klein for a new generation and a source of fresh insights for those who already know who William Klein was: a true original. 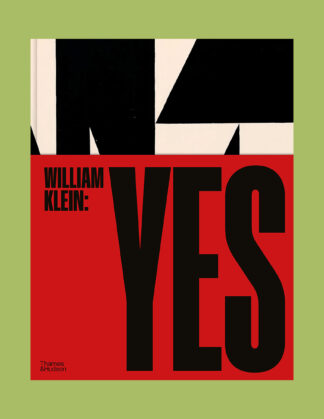