Manet called him “the greatest painter of all.” Picasso was so inspired by his masterpiece Las Meninas that he painted 44 variations of it. Francis Bacon painted a study of his portrait of Pope Innocent X. Monet and Renoir, Corot and Courbet, Degas and Dalí… for so many champions of art history, the ultimate sounding board was — and remains — Diego Rodríguez de Silva y Velázquez (1599–1660).
First available as an XXL-sized volume, this accessible edition brings together Velázquez’s complete works with a selection of enlarged details and photography of recently restored paintings, achieved through the joint initiative of TASCHEN and Wildenstein. The dazzling images are accompanied by insightful commentary from José López-Rey on Velázquez’s interest in human life and his equal attention to all subjects, from an old woman frying eggs to a pope or king, as well as his commitment to color and light, which would influence the Impressionists over two centuries later. 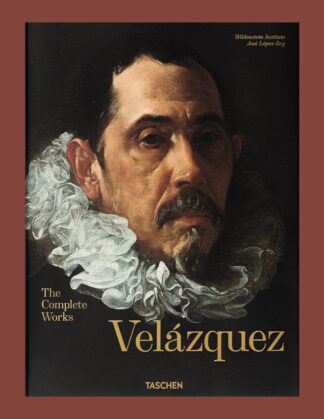