Stig De Block: Back to Back, From Backyard to Boulevard

Belgium born Stig De Block is a cross-genre photographer and director known for his straight forward process and bold colors. His story driven approach is a constant interaction between the everyday real and his own layers of imagination.
With a strong interest in subcultures, the resulting images reflect a contemporary realm of the authentic and explicit beauty. Residing between Paris – London – Los Angeles. His work has been featured in magazines like: i-D Magazine, Clash Magazine, Brick Magazine
M, Le Monde, Office magazine and many others. Commercial clients include: Adidas, A.F. Vandevorst, Christian Wijnants, Heron Preston, Missoni, Nike, Smets and Wrangler,…

In 2018 he started a series called “Back To Back: From Backyard to Boulevard” for which he spent 4 years, 9 months and 1000 of milesin the dash, documenting an honest & intimate story about the Lowrider scene in Los Angeles.

“I can vividly remember the first lowrider event I attended in Los Angeles. I had driven out on a Sunday in October 2018 to attend an event called Sunday Funday. The concept is self-explanatory: everybody comes together to have fun on Sunday, without any bullshit, with a common love for lowriders. It was located at the intersection of Rosecrans on South Broadway, on the border between Compton and Carson, in an industrial area — a very long boulevard with factory buildings and warehouses. When I first showed up in the early afternoon, there weren’t that many people out. But within one hour, the whole place was packed with barbecue vendors and people selling t-shirts and merchandise. I feel like there were 500 to 800 people there that day. And for me it was like: “Wow, all the things that I’ve been interested in my whole life—LA culture, architecture, cars, and rap music— all come together in one place here.” It was very overwhelming at first, but I just kept taking photos, talking to people. I was the only White European male at that time at that venue. As someone who was standing out in the crowd, people approached me, both curious and suspicious. “Are you the feds?” “Do you work for TV, are you a journalist?” “Who are you?” I responded, “No, it’s just my first time here. I’m a photographer from Belgium, passing by because I’m very attracted to the lowrider scene.” In response, a lot of people gave me a warm welcome. “Oh cool. Let me tell you something about my car, look at this hydraulic system, look at the back of the car, I’ll pop the trunk for you.” People began to explain all their customizations—who worked on their car, who did the paint job, what it took for them to build such a car. And it dawned on me: lowriders are about more than just aesthetics.” (Stig De Block 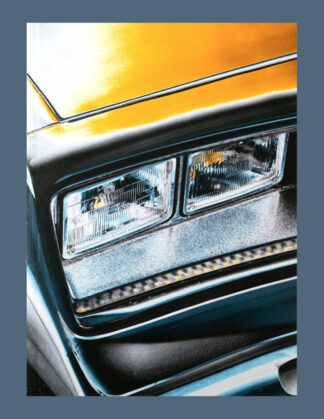 Je bekijkt nu: Stig De Block: Back to Back, From Backyard to Boulevard €50,00
Toevoegen aan winkelwagen
0