Smiljan Radić Clarke (Santiago de Chile, 1965) graduated from the Catholic University of Chile’s School of Architecture in 1989 and undertook further studies at the Istituto Universitario di Architettura di Venezia, Italy. He opened his own architecture firm in Santiago de Chile in 1995.

He was selected as the best architect under 35 by the College of Architects of Chile in 2001; he was given the Architectural Record’s Design Vanguard award in 2008; named honorary member of the American Institute of Architects, USA, in 2009; in 2013, 2015 and 2018 he obtained the award for best Chilean Building, by Universidad Mayor, Chile; in 2015, the Oris Award, Croatia; in 2018 the Theater Bio Bio was nominated as one of the best building by Architectural Record´s Design Vanguard and in 2018 he obtained he Arnold W. Brunner Memorial Prize of the American Academy of Arts and Letters, USA.

Featuring a conversation with Radić and Enrique Walker, it presents 25 designs ranging from a wine cellar, bus stop, chapel, antenna tower, and several houses, to the Chilean Museum of Pre-Columbian Art in Santiago, the Boca Sur Civic District, the Alexander McQueen Project, the Serpentine Gallery Pavilion in London, and the Beyeler Foundation near Basel, which owns and oversees the art collection of Hildy and Ernst Beyeler.

Smiljan Radić is the president of Fundación de Arquitectura Frágil. The aim of the foundation is to promote the study and dissemination of experimental architecture or that of an improbable reality, where the boundaries of architecture are blurred.

He currently lives and works in Chile, always in close collaboration with the sculptor Marcela Correa.
Categorie: architectuur 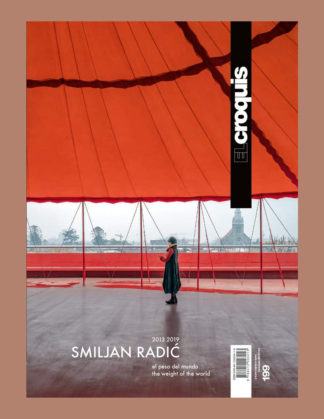