Published to accompany the major exhibition at the Musée des Arts Décoratifs, Paris, this book on the work of the great twentieth-century designer Elsa Schiaparelli is destined to become a must-have reference for all fashion lovers.

The couturiere Elsa Schiaparelli (1890–1973) was a key figure in Paris fashion between the two World Wars. Following in the footsteps of her mentor Paul Poiret, she designed her first knitwear collection in January 1927 announcing the arrival of a major new designer. Decorated with trompe-l’oeil motifs in black and white, her sweaters were an immediate success in both France and the US. In 1935, the Maison Schiaparelli opened on the Place Vendo^me in Paris, selling collections designed for sports, city, and evening wear.

Like her arch-rival Gabrielle Chanel, Schiaparelli also worked closely with artists, including Man Ray, Jean Cocteau, and Salvador Dalí, with whom she created her now-iconic lobster dress. Taking a cue from Surrealism, her creations were hugely imaginative and made use of innovative new materials. The “Schiap” style continued to develop through the 1930s and her designs were renowned for their originality and creativity. Her most famous collections addressed themes including the circus (Summer 1938) and astrology (Fall/Winter 1938–39). In 1937, Schiaparelli launched the fragrance “Shocking,” named after shocking pink, which had become her signature color.

Alongside vintage photographs, sketches, and contemporary features from Harper’s Bazaar and Vogue, this volume presents specially photographed masterpieces from the collection of the Musée des Arts Décoratifs in Paris. Destined to be the definitive volume on the great designer, this lavishly produced and illustrated book brings to life the work of this influential figure in the history of fashion. 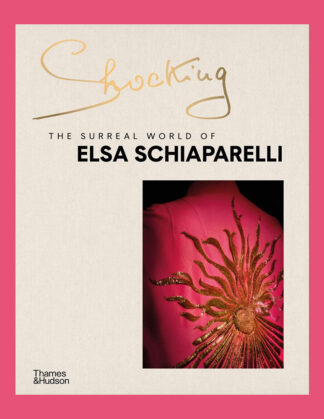