Post-Civil War Spain used the countryside as locus and symbol for the reconstruction and modernisation of the state. The Modern Village in Franco’s Spain studies the reconstruction of the towns devastated between 1936 and 1939. It analyses the ideological, political, and urbanistic principles of Franco’s hydro-social programme of modernisation of the countryside through the creation of man-made landscapes (Kulturlandschaften) of dams, irrigation canals, electric power plants, and new settlements – a genuine experiment in water urbanism.
The consequent strategy of interior colonisation entailed the construction of 300 new villages or pueblos, each designed as a ‘rural utopia’ centred on a plaza mayor, which embodied, between tradition and modernity, the political ideal of civil life under the national-catholic regime. In the 1950s – 1960s, a new generation of architects, including José Luis Fernández del Amo, Alejandro de la Sota, and Antonio Fernández Alba, reimagined the pueblos as platforms of urban and architectonic experimentation in their search for an abstracted rural vernacular and an organic urban form merging with the landscape. 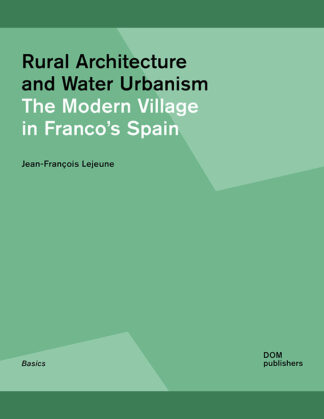