Quirino De Giorgio (1907–1997) is among the few Italian architects whose careers represents the entirety of the twentieth century: from futurism through fascism to the experimentations linked to the invention of reinforced concrete. Too often remembered exclusively for his early futurist and fascist works, De Giorgio is an architect whose production continued, until his last years, to develop in the experimental and dynamic way which had characterized its beginnings.

Quirino De Giorgio: An Architects Legacy, the first English-language book dedicated to the Italian architect, is a constellation of his surviving buildings shown through the eyes of photographer Enrico Rizzato. In Rizzato’s pictures, each one of the ninety surviving works will showcase the universality of De Giorgio’s projects and the transformations that time has stamped on his creations, taking the reader on a voyage across the different facets of Italian architecture. Accompanying site plans, floorplans and sections provide deeper insight into De Giorgio’s spatial, structural, urban, and landscaping inventions. An opening essay will introduce the reader to the still relatively unknown method and life of this highly original yet still too little known architect. The book also includes a full list of De Giorgio’s works that has been reconstructed here for the first time through extensive archival work. 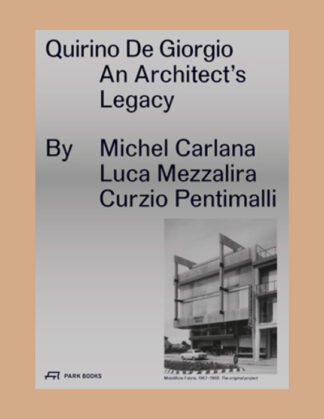