Journal founded in 1953 by the poets Joseph Noiret (one of the founders of Cobra and father of the choreographer Michèle Noiret), Théodore Koenig and Marcel Havrenne. An iconoclastic, crazy, playful and brilliant magazine which played on friendship, the meeting of men and the arts, freedom of expression and the unexpected, without any doctrinaire closure. Illegitimate but obvious child of the Dadaists, first cousin of the Cobra movement, vague offspring of the surrealists, “Phantomas” advocated poetic subversion.
The review had its famous “freelancers”, with texts by Samuel Beckett, Jorge Luis Borges, Jean Dubuffet or Gaston Chaissac. It was the meeting place for a whole generation, from Serge Vandercam, Joseph Noiret and Achille Chavée to André Blavier et la pataphysique and Pierre Puttemans. The numbers of what is called “the most beautiful magazine in the world” were illustrated with works by Van Lint, Van Anderlecht, Wijckart, Joostens or Dotremont. […]

This publication is an overview and documentation of the revue Phantomas and the exhibited art works in the Musée d’Ixelles. In very good condition 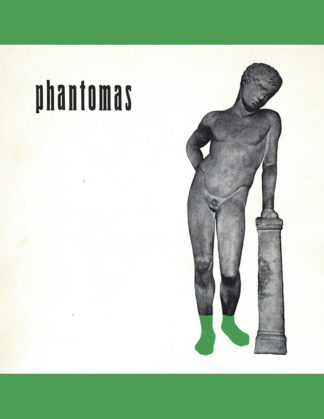