Ostuni’s passion for light and lighting, coupled with his desire to make good lighting affordable for everyone, has resulted in the most beautiful lighting units, presented here in their entirety for the first time.

Volume 1 paints a comprehensive picture of O-Luce’s company history and takes a look at the life story of its founder, Giuseppe Ostuni. Originally from Trieste, he founded his company O-Luce in Milan at the age of 40 and went on to become a pioneer of innovative, modern lighting units. Ostuni’s brother Angelo, together with Franco Buzzi, were the first to make O-Luce known beyond the borders of Italy and were key in shaping light design in the early 1950s. New materials, such as Perspex and industrial glass, or new light source technologies such as the Cornalux or halogen light, had a decisive influence on the design of modern lighting and here too Ostuni and his young designers, above all Tito Agnoli, Joe Colombo and Bruno Gecchelin, were at the forefront of lighting design.

Volume 2 presents all the sources and historical evidence on which the catalogue raisonné is based. After a detailed overview of Ostuni’s systematics, Biographies introduces the most important of his designers. The main body of the second volume is comprised of the catalogue raisonné, which is divided into four sections: wall lamps, table lamps, floor lamps and ceiling lamps, containing a total of over 560 lamps. Each lighting unit is described with its model number, designer, year of design, materials, dimensions and – in those cases in which they were published – bibliographical details.

Volume 2 also contains a critical chronological overview of those O-Luce lighting units published in specialised literature, magazines and catalogues at the time. A selected bibliography and a comprehensive index of the relevant figures mentioned concludes the second volume. 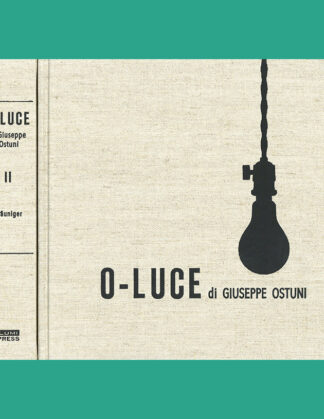