Set grids and rules give people the space to think and invent creatively. With its firm shapes and clear grids, Letterform Variations inspires in many ways and gives the creative mind the space for new ideas and development. We are very proud to present it to you today for the first time.

692 pages containing 19,840 letters, all derived from one framework. Letterform Variations is a playful study into letterform construction using basic grid and shape based systems, and its potential to generate vast amounts of varying alphabetical outcomes.

Letterform Variations is the product of Nigel Cottier’s methodology for developing letterforms that are based partly on visual transformations generated by algorithmic functions, such as constraints, rules, grids, and modules, and partly on designerly judgements about composition, balance and visual dynamics. Cottier’s modular systems are built within expansive design spaces that facilitate the production of an almost infinite range of outputs, but what distinguishes them is the considered choices he makes subsequently, categorizing, and editing his results as competent and handsome representations of alphabetic forms. This connection between impartial geometric shapes and the alphabetic code brings to mind Paul Elliman’s contention that the boundaries between typography, typology, and topography are never distinct. 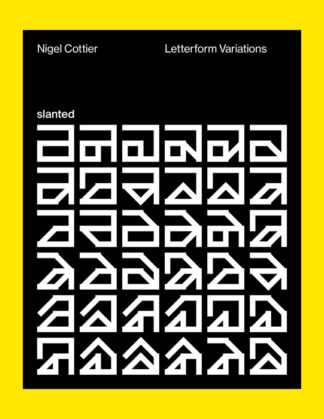