This book examines the monumental mosaics that were created in Moscow during the Soviet era. While monumental mosaics became common in other Soviet cities and republics in the 1960s during the age of modernism, mosaics in the capital of the USSR were used for works in the art deco style and for ‘pictures’ in the socialist realist style. As a result, the entire history of Soviet art is reflected in Moscow’s metro stations, palaces of culture, military museums, hospitals, schools, and prefabricated houses. Many important mosaics are now disappearing before our eyes – victims of destruction or dismantling. The majority are not listed under state protection, and the authors of many remain unknown.
This book is structured chronologically. Four sections (art deco, socialist realism, modernism, and postmodernism) show and describe 140 mosaics. The appendix lists 322 mosaics that have been identified in Moscow. The guide places well-known works by Alexander Deyneka, Pavel Korin, Boris Chernyshev, Evgeny Ablin, Yury Korolev, and Leonid Polishchuk side by side with mosaics by artists whose names were excluded from the history of art and architecture for a long time.
The idea for this book came from English photographer James Hill, who spent three years seeking out and photographing works of Soviet monumental art that have not received the attention they deserve in Russia and have often been regarded as propaganda in the post-Soviet period. 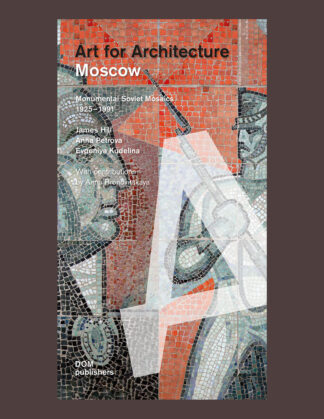