Over the course of his four-decade career, Mike Kelley(1954 – 2012) created a rich oeuvre that critically questioned aesthetic conventions and examined all forms of culture. The approximately one hundred ‘Memory Ware’ and associated works were made during the first decade of the 21st century, all of which are reproduced in this catalogue following the exhibition at Hauser & Wirth New York from November to December 2016.

Named for a genre of North American folk art in which everyday utilitarian objects, such as vases, are coated with a claylike substance into which are embedded small objects including shells, beads and buttons, Kelley’s ‘Memory Ware’ series consists both of wall-hung works (known as ‘Memory Ware Flats’) and freestanding pieces. The artist’s appropriation of this folk tradition in two dimensions eliminates recognizable underlying objects and expands the original method to include a wider variety of keepsakes. The ‘Memory Ware’ sculptures, by contrast, juxtapose dense clusters of found objects with minimally or undecorated areas and reintroduce the coherence of an overall structure.

A new scholarly essay by Ralph Rugoff considers the place of personal and collective memory in the artist’s oeuvre as well as reading the ‘Memory Ware’ series in its entirety from both visual and art historical standpoints. Kelley’s own essay on the project is reprinted and offers direct insight into the artist’s thinking and methodology. The publication thus offers the opportunity to appraise Kelley’s series as a whole. 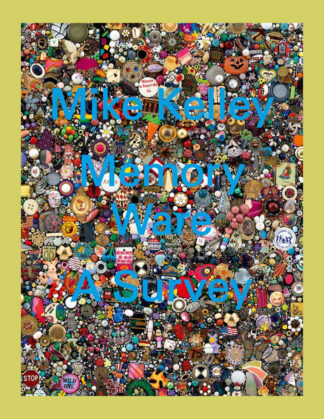