“The more I reflect on her work, the more it appears to me as a peculiar form of Land Art”, is how arthistorian Ory Dessau describes the art practice of Belgian artist Marie Cloquet. The artist put together an extensive archive of photographs and uses it time and again to create her monumental landscapes on canvas. She considers the images, both digital and analog, as sketches and sees similarities between her process and that of classical painters. Close to the way in which, for example, the Flemish masters arranged the sketches they made on site, once back in their studios, into new, realistic looking compositions, Cloquet cuts up and mixes her images into independent entities that remain only loosely connected with the real world. After manipulating the photos in the darkroom, she prints them on drawing paper, tears them up and reconstructs them collage-wise, using watercolor paint. The rugged, anonymous worlds that emerge, play with scale, size and perspectives and simultaneously appeal, as places of devastation, to our collective memory. Marie Cloquet says, that at his core, her work is about collateral damage. If initially her pictures, mainly because of the analog production method, remained confined to the black and white spectrum, the artist has recently begun to gradually introduce color in her work. Subtle, pale and sketchy, so that the works tend towards the realm of the suggestive. It is an attempt to place a gentle veil over dramatic footage, to cover confrontational facts on the current state of the world and the human condition with a layer of beauty. 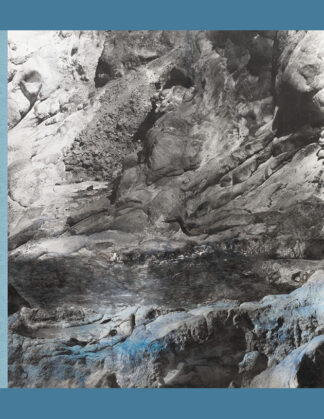