From 1970 Luigi Ghirri roamed around the houses, streets, squares and suburbs in his adoptive town of Modena and built a body of early work which contains within it signposts to many of the directions his practice would subsequently take. Most of the time he worked in Modena, only occasionally travelling further afield to the beaches of Rimini on the Adriatic or the Swiss Lakes. He began to map out projects and themes – some specifically grouped around a subject, others gathered around a more poetic organising principle. One of the latter was Colazione sull’Erba (Breakfast on the Grass) in which he bought together photographs made between 1972 and 1974 on the outskirts of Modena which he states he “visited in an ironic and anxious manner”. His focus was the juncture of nature and artifice in the man-made environment; the symmetries of cypress trees, well-kept lawns, the personalising touch of plants in pots, palm trees and cacti with their promise of somewhere else. Modeled on Kodachrome, Ghirri’s seminal paean to photography which he self-published in 1978, this volume is the first book in a planned series which will take Ghirri’s original categories for his own work as the basis for a collection elaborating the great photographer’s oeuvre. 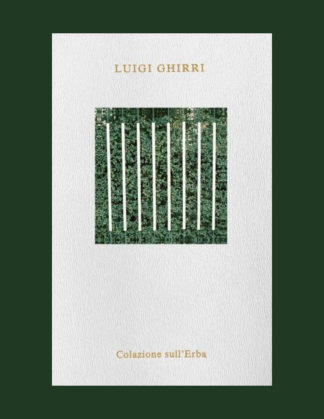