Louis Kahn on the Thoughtful Making of Spaces: The Dominican Motherhouse and a Modern Culture of Space

It was not by chance that Louis Kahn’s move into his profession’s spotlight coincided with the crisis of modern architecture: representing, as his work increasingly did, those aspects of space which modernism had so ambitiously removed from its program. Kahn’s rethinking of modern architecture’s paradigm of space belongs to his most important contributions to the métier. In tracing the genesis of the unbuilt project for the Dominican Motherhouse (1965–69), we are given a close-up view of Kahn at work on a few fundamental questions of architectural space: seeking the sources of its meaning in its social, morphological, landscape and contextual dimensions.
This rich and multivalent project opens the way to a second section, which sheds new light on several of major works in a timely reappraisal of Kahn’s work.The result of extensive research, illustrated with unpublished archival material and new analytic drawings, this affordable volume is an indispensible companion to Louis Kahn: Drawing to Find Out. 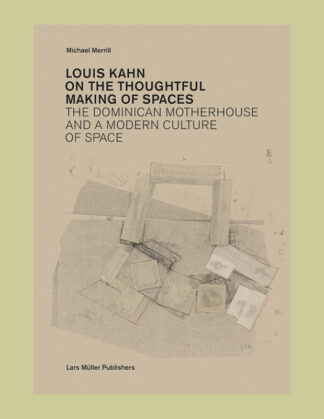 Je bekijkt nu: Louis Kahn on the Thoughtful Making of Spaces: The Dominican Motherhouse and a Modern Culture of Space €35,00
Toevoegen aan winkelwagen
0