Le Corbusier. Toward an Architecture

Few books in the twentieth century drew as much attention as Le Corbusier’s Vers une architecture (1923), published in English as Towards a New Architecture (1927). He urged architects to cease thinking of architecture as a matter of historical styles and instead open their eyes to the modern world. Le Corbusier wrote simultaneously as an architect, city planner, historian, critic, discoverer and prophet, and he illustrated Towards a New Architecture with striking images of airplanes, cars and ocean liners, provocatively placed next to views of Classical Greece and Renaissance Rome. His slogans — such as ‘The house is a machine for living in’ — and his ‘Reminders to Architects’ changed how his contemporaries saw the relationship between architecture, technology and history. This edition includes a new translation of the original text that preserves the design and compelling voice of the original, background notes on Corbu’s concepts and iconography and a scholarly introduction that reconstructs the production of the book, the origin of its ideas and its reception throughout the world. 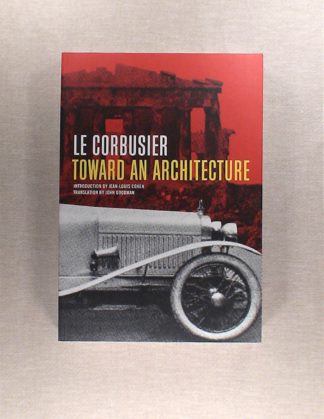