Special Reprint of the issues 177/178 of El Croquis dedicated to the work of the French practice Lacaton & Vassal. This reprint of ‘El Croquis’ celebrates Paris-based architects Lacaton & Vassal, after founders Anne Lacaton and Jean-Philippe Vassal became Pritzker Architecture Prize Laureates in 2021. It gives special consideration not only to the evolution of their methodology and ideals, through critical analysis by Arnoldo Rivkin and Juan Hereros and an interview with the architects, but also to an extensive selection of exemplary projects. Among the featured works are the Nantes School of Architecture, FRAC Nord-Pas de Calais, Guangzhou Museum, Le Grand Sud Polyvalent Theater in Lille, housing projects in Paris, Saint Nazaire, Mulhouse, and Bordeaux, plus their newest projects since winning the Pritzker PrizeBesides the original content, this book includes:

Jean Philippe Vassal was born in Casablanca, Morocco, in 1954. He graduated from the School of Architecture of Bordeaux in 1980. He worked as an urban planner in Niger from 1980 to 1985. He is professor at UdK Berlin since 2012, and has been a visiting professor at the School of Architecture in Bordeaux (1992-1999), the School of Architecture in Versailles (2002-2006), the School of Architecture Peter Behrens in Dusseldorf (2005), the Ecole Polytechnique in Lausanne (2010-2011), the Technische Universität Berlin (2007-2010) and at the Pavillon Neuflize OBC of Le Palais de Tokyo in Paris (2013-2014).
Anne Lacaton and Jean Philippe Vassal created the office Lacaton & Vassal in 1989, based in Paris. The office has a practice in France, as well as abroad, working on various buildings and urban planning programs. All their projects are based on a principle of generosity and economy, serving the life, the uses and the appropriation, with the aim of changing the standard. 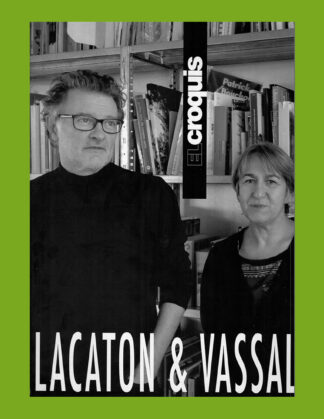