Over the years, Kati Heck (b. 1979) has developed a highly personal vision of the everyday. Her works resemble fictitious projections from her own universe, and she uses the diversity that is inherent in painting to create a link with the potential of the imagination. Heck is principally known as a painter, but also seeks expression in other media such as photography, sculpture and performances. Her colourful oeuvre is consistently characterised by irony, drama and a highly original sense of the grotesque.
Hauruck, which is being published to accompany Heck’s solo show in Kunstmuseum Den Haag (from 6 June to 8 November 2020), contains some 75 works that were created between 2013 and 2020, as well as a graphic short story written specially for this book. 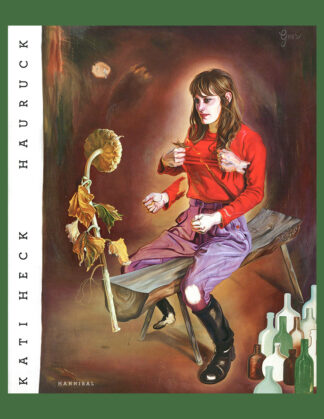