The pioneering conceptual artist John Baldessari (b. 1931) began his career as a painter in the 1950s, but in the subsequent decades he expanded his practice in a new and groundbreaking direction by juxtaposing texts with found photography or appropriated images. These texts questioned the nature of art and the art-viewing experience, suggesting new meanings for the images they accompanied. This interaction of words and images remained a critical aspect of Baldessari’s work, even as he branched into other media, such as site-specific installations, drawings, video, sculpture, prints, and multiples.

The first of a projected four-volume set, this lavishly illustrated book features about 500 works and chronicles an important shift in Baldessari’s thinking during these formative years. Included are such landmark works as the Cremation Project (1970), where Baldessari incinerated the “body” of work he had made between the years 1953 and 1966. The ashes of the cremated works were then baked into cookies, and the rest sealed in a book-shaped urn, which he then presented along with a plaque announcing the “life” and “death” dates. Baldessari’s work and teaching have been greatly influential on a subsequent generation of artists.

The book features an essay by Yve-Alain Bois considering Baldessari’s ethos as a generator of his artistic practice. Also included are an interview with Christopher Knight and a detailed chronology of the artist’s life and work. 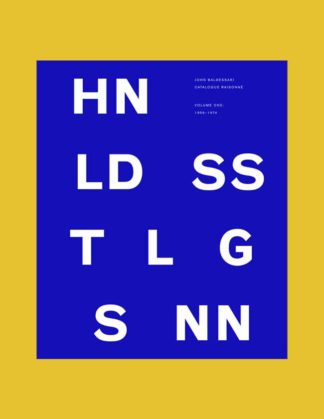