Johan De Wilde is a Belgian artist, born in 1964. His oeuvre consists of pencil drawings, prints, paintings, photo series, graphic art and collages. Since the mid-nineties he creates drawings that are meticulously constructed of thin horizontal and vertical lines, layer after layer, by which hints of shapes and numbers are made visible. The technique suggests a certain swiftness of movement, recalling the vague quality of a film still or blurred photograph.
De Wilde’s time-consuming work method forms an antithesis to the fast pace of life and the transience of our overly saturated digital visual culture. “As I draw”, he says, “I think of the activities of people in the outside world. Outside, time flows. Inside, it seems to stand still. Each pencil line becomes a unit of time. Every drawing represents a shadow time”. This may be seen as an ironic remark on ‘Ars longa, vita brevis’.
This book is the third volume of the Hands Of Time series and covers De Wilde’s new works from the period 2017–2021. It depicts three series of drawings: Pars Pro Toto (2018–2020); Requiem – The Long Goodbye (2017–2018, published in the book Requiem, MER. 2019), which he created in remembrance of art historian Tanguy Eeckhout; and Pi – Fugue pour les survivants (2007–work in progress, part of the collection of S.M.A.K.), which began with the irrational number pi and continues in a long series of numbers after the comma.
The Pars pro toto series is based on Fra Angelico’s frescoes in the San Marco Monastery in Florence. Each drawing represents a particle of colour from one of the frescoes. The colour is represented as an enlarged pixel, framed by the four edges of the adjacent pixels.
The pixel has the same ratio as the original fresco. But because the murals don’t have the same proportions as the cardboard supports (A2, A4, or A6), residual grey areas occur, the sizes of which vary according to the fresco’s dimensions. These empty spaces are naturally part of the drawing and are covered with the same pencil stripes as the “actual” representation, so that the edges of the coloured areas contain pigment lines that seem to have overrun. This gives rise to “ghose images” or “after images” in the corners, which are the result of unsightly particles of pigment being carried along by the pencil as the drawing is completed.
The book also includes a never before published poem by Gust Gils, a collaboration with musician Heleen Van Haegenborgh on the subject of the infinitely continuable series Pi – Fugue pour les survivants, a letter by Philippe Van Cauteren and texts by Hans Theys and Luc Derycke. 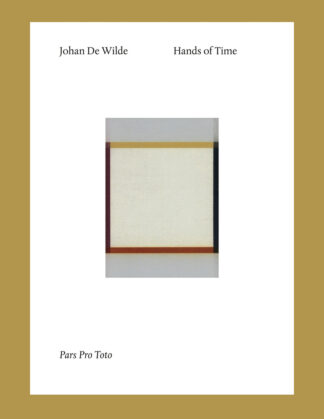