In 1931, aged 29, Jean Royère (1902–1981) resigned from a comfortable position in the import–export trade in order to set up business as an interior designer. He learnt his new trade in the cabinetmaking workshops of the Faubourg Saint-Antoine in Paris. In 1934, he designed the new layout of the Brasserie Carlton on the Champs Elysées and found immediate success, embarking upon an international career that was to endure for nearly half a century. Royère tackled all kinds of decoration work and opened branches in the Near East and Latin America; among his patrons were King Farouk, King Hussein of Jordan and the Shah of Iran, who entrusted him with the interior design of their palaces. The Royère style is a wonderful amalgam of bright, cheery colors, subtly organic forms and precious materials. Compact and fluid, robust and delicate, Royère’s chairs, lamps, chandeliers, sofas and desks exude a sensuous confidence, suggesting both comfort and alertness. This superbly produced, linen-bound, two-volume boxed monograph would have made Royère proud. The first volume explores the designer’s work across four themes inspired by his creations: “The Vegetal Realm,” “The Animal World,” The Imaginative Realm” and “Line and Design.” In addition to prefaces by Jacques Lacoste and Patrick Seguin, this volume contains interviews with Lorenz Baümer, Béatrice Salmon, and Christian Lacroix–by art historian and journalist Françoise Claire Prodhon–and a chapter looking back to the Jean Royère exhibition at the Sonnabend Gallery in New York in 2008. The second volume opens with a 1963 interview with Royère by Pascal Renous, and then presents the “Jean Royère Repertoire”: 380 items of furniture and other creations accompanied by detailed references and illustrations of variants. The volume is rounded off by a sketchbook offering 156 hitherto unpublished Royère drawings. This authoritative and sumptuous publication is the last word on this midcentury master. 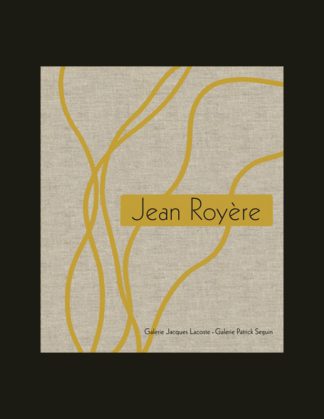