This catalogue raisonné contains the entire production of the abstract pioneer Hilma af Klint (1862–1944). The catalogue consists of seven volumes containing a total of nearly 1,600 works.
Hilma af Klint has taken the art world by storm. Once virtually unknown, she is now included among the greatest modern painters and her works are considered groundbreaking. Almost 80 years after her death, she has redrawn the map of early abstract art, both in Sweden and internationally.
”A catalogue raisonné is necessary in order to see the different cycles, motifs and symbols that recur in such an exciting way. If someone really wants to understand how Hilma af Klint’s works function, they need these books,” says Daniel Birnbaum, director of Acute Art and former director of Stockholm’s Moderna Museet, who was co-editor with Kurt Almqvist.
The first three volumes, Spiritualistic Drawings 1895–1910, The Paintings for the Temple 1906–1915 and The Blue Books, were published in 2020. The first volume presents the 15 sketchbooks produced by the group of artists known as The Five, which included af Klint. This period constitutes an important starting point for her abstract painting and for what would later lead to her most important series—The Paintings for the Temple. The second volume comprises these paintings, a total of 193 works, including the iconic The Ten Largest.
The third volume presents the ten blue books that Hilma af Klint used to show small copies of The Paintings for the Temple, an easy way to present her works to people when she traveled. According to af Klint’s own notes, these books were not intended to be studied until 20 years after her death.
The fourth volume, Parsifal and the Atom 1916–1917, shows the two series Parcifal and The Atom. The Parcifal series was inspired by the legend of King Arthur and has been interpreted as an investigation of inner realms, while The Atom is apparently an exploration of the spiritual structure of the universe.
At the end of the 1910s, Hilma af Klint created a number of series of small paintings in which abstract imagery is explored using a ruler and compass. These are presented in the volume Geometric Series and Other Works 1917–1920.
In 1922, at the age of 60, Hilma af Klint completely abandoned her geometric approach for watercolours inspired by the Anthroposophical movement. The works from this period are presented in the sixth volume, Late Watercolours 1922–1941. 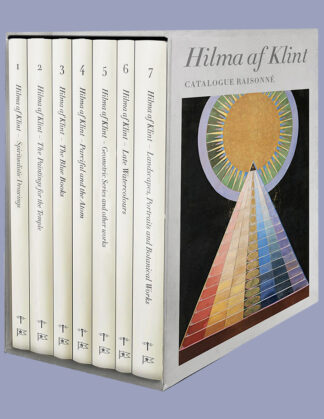