Gottfried Semper (1803-1879) was a German architect, art critic, and professor of architecture, who designed and built the Semper Opera House in Dresden between 1838 and 1841. In 1849 he took part in the May Uprising in Dresden and was put on the government’s wanted list. Semper fled first to Zürich and later to London. Later he returned to Germany after the 1862 amnesty granted to the revolutionaries.

Semper wrote extensively about the origins of architecture, especially in his book The Four Elements of Architecture from 1851, and he was one of the major figures in the controversy surrounding the polychrome architectural style of ancient Greece. Semper designed works at all scales, from major urban interventions like the re-design of the Ringstraße in Vienna, to a baton for Richard Wagner. His unrealised design for an opera house in Munich was, without permission, adapted by Wagner for the Bayreuth Festspielhaus.

Gottfried Semper’s years in exile in London (1850–1855) were a time of highly inspir­ational experiences. The London of the first World Expo offered the German archi­tect an immense trove of objects for study and an intellectual surrounding that provided seminal impulses for his innovative cultural-­history­-based theory of archi­tecture. That revolutionary period found not only politics and society in radical upheaval, but also the world of art and science. Internationalization, and indeed glo­balization, of knowledge was thereby a particularly distinctive phenomenon, the most important place of which was the capital of the British Empire. 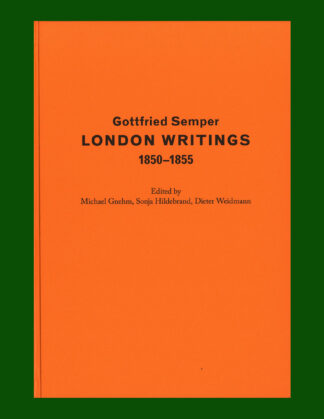