Already very early in his artistic career, Georg Baselitz showed a keen interest in printmaking. In 1965, as a scholar at the Villa Romana in Florence, he began to collect the Italian Mannerist Parmigianino. In an interview he explained: »I liked printmaking for two reasons: Firstly, it is the simplest fixed way to realize an artistic idea. Secondly, it is made for people with little money, for common people.« His first etchings date from 1963–64, woodcuts from 1966, followed by linocuts in 1977 – works that were published predominantly in black and white by Johannes Gachnang in a two-volume catalogue raisonné (Vol I: 1963–1974; Vol. II: 1974–1982). The process of cataloging is ongoing. Volumes I and II are to be reissued at some time in the distant future, amended with currently un­published information. Similar to his paintings and sculptures, his graphic works also address subject areas such as heroes, shepherds, eagles, trees and more. The book at hand brings together, with color illustrations throughout and with unique technical brilliance, the work numbers from 1983–1989. There is no question that Baselitz’ graphic work is in no way inferior to his painting and sculptural work. The artist has not only got to the heart of the media in the diversity of his different technical approaches and solutions for several decades, but his unparalleled virtuosity has placed it at the forefront of the art of postwar modernism. 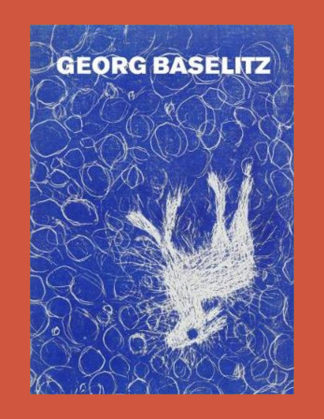