Forte, this lively and friendly typeface that everyone knows, has been used, misused, and overused for over six decades now, ever since it was published by The Monotype Corporation in 1962. Well-known figures in the typographic world like Stanley Morison and Vincent Connare have stood in the limelight of this typeface’s sprightly lifelines. But the typeface’s designer, Karl Reißberger, remained little known. Until now.
finding Forte traverses the world in search of “findings” such as Reißberger’s early posters, original designs, and advertising materials to trace the origin story of the “typeface everyone knows.” Sixty years after Forte’s first appearance, it has found new life as Toshi Omagari’s revised typeface, Forte Forward. Its release accompanies this book.
Also finding its way into this book on Forte are the artistic visions of thirty-one contemporary artists who have examined Forte’s formal language in dialog with its historical outlines. The interpretations of these international creatives open up new approaches to typography. 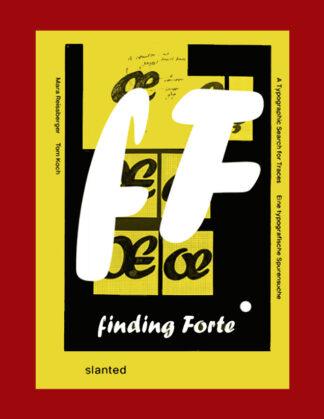