A contemporary of Soane, Nash and Pugin, Decimus Burton (1800-1881) was one of the most prolific architects of his day and is best known for his work in London’s Royal Parks, including: the Wellington Arch and the Serpentine pavilion in Hyde Park; villas and terraces in Regent’s Park and the London Zoo; the Temperate house at the Royal Botanic Gardens, Kew; and the layout and architecture of the seaside towns of Fleetwood and St Leonards-on-Sea, and the spa town of Tunbridge Wells. Other projects include the Atheneum Club, Pall Mall, Adelaide Crescent in Brighton, and Phoenix Park in Dublin.
Despite his success, little is known about Burton and this book is the first to fully examine his work, from his early years and his father’s influence, through his apprenticeship with John Nash, his works in private practice and his growing reputation, to his exploits in town planning and glass houses. This is set within a fascinating social and political context, with stories of conflict and heated dispute amongst the key players which paint a vivid portrait of the architectural profession and construction industry during this period. It reappraises Burton’s legacy and summarises his significant achievements and reveals how he contributed to the birth of the picturesque style that was to develop into the Arts and Crafts movement. 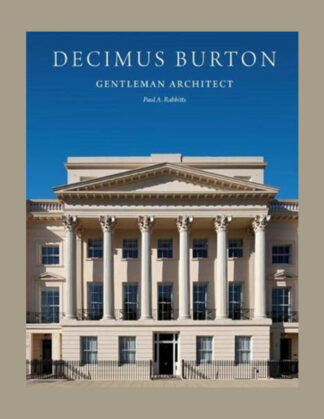