This edition presents the “Room of Peace”, first shown as an exhibition-installation at the 2014 Venice Architecture Biennale. It is the first in a series of books and publications by the author, each dedicated to one photographic project or installation.

Statement
I was allowed to photograph Sala della Pace, the Room of Peace, in early morning before visitors would arrive. On the first day, I turned off the spotlights that are used to highlight Ambrogio Lorenzetti’s famous fresco panorama and opened the curtains covering the only window in the room. In the daylight, the panorama does not appear like a singular work of art—rather, it is part of a painted architectural order that fully covers the walls and ceiling. The lower part of the space is painted to create the impression of an ornamental wall relief in various materials. Looking up, above eye level, a painted frieze frames the space and seamlessly turns into the fresco panorama depicting the City-State Under Tyranny, Virtues of Good Government, and Good City-Republic. The space has been fully painted to create the impression of a complex and grand room inside a simple, rectangular, plastered volume in the side wing of the Palazzo Pubblico in Siena. This room, from which the city used to be governed by the elected Council of Nine, was not articulated through rare or expensive materials but through a single image depicting a room of power—or an illusion of it. Though, to us, these frescos may look like documents of the long-forgotten past, to their contemporaries they were meant to project future visions: one that they feared, the other, that to which they aspired. The painted image of the room as a work of art had the power to instill the governing Council with the sense that every possible future was still in their hands. The Room of Peace reminds us that an image is, of course, nearly always a projection—an image nearly always speaks about visions more than it speaks about facts. But for me the crucial message of the Room of Peace is that an image has more power when it is contextualized, in an architectural or urban space and in a specific social situation. In contrast, contemporary images are rarely contextual, viewed on mobile devices and endlessly circulating. They are unspecific and therefore neutralized. In contemporary public and political spaces, could a contextual image—an image in a space, like in the Room of Peace—still be a vital agent?
Bas Princen, 2018 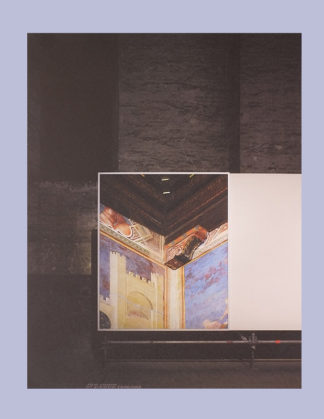