During the first ten years of his career, Belgian architect Arthur Degeyter (1919-2004) mainly built classically inspired houses. The first ‘modern’ house he designed was for glass artist Michel Martens who later became his collaborator designing and manufacturing stained glass windows for Degeyter’s many churches. The architect executed a lot of commissions for the diocese of Bruges including renovations, restorations and newly constructed churches. Degeyter worked for small and big companies. His most representative realisations are the KI-centrum (Loppem), the offices of the National bank in Bruges and the offices and storage sites of Vandecasteele Houtimport (Aalbeke).
But the most significant and largest part of the architect’s oeuvre is without any doubt houses. They bring out the stylistic diversity of the architect. He possessed the talent of keeping the old and embracing the new at the same time, and respected local materials and traditions. Degeyter was a man with a clear vision and only one criterium: the aesthetic.
He was an artist captured by beauty and inflamed by architecture. We see this mostly in his restorations and renovations. His approach is like a Gesamtkunstwerk whereby interior, design and exterior are all part of the result. He was not limited to designing just a house or structure but contributed to the furniture and gardens too. His oeuvre is extensive, with an estimated one 1000 realisations. Most of his work is situated in the West of Flanders but can also be found in the whole of Flanders and occasionally in the Netherlands, France or Spain. In 1992 the architectural office Arthur Degeyter ceased to exist. But the architect kept designing in collaboration with his son Jan for more than ten years after closure.
The ambiguous attitude of Degeyter, who built eclectic and pure modernist houses at the same time, makes it hard to define his style. He respected the wishes of his clients and translated the living culture of men into his own architectural language. He knew his history and modern trends and was not afraid to be inspired. This publication is the first monograph dedicated to post-war Belgian architect Degeyter. 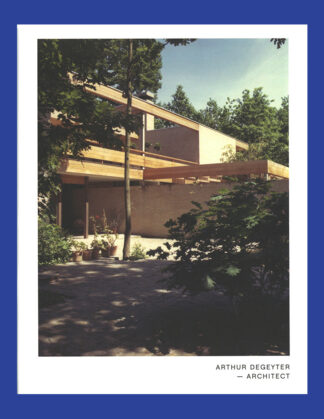