Alejandro de la Sota: In Defence of a Logical Architecture and Other Essays (2G Essays)

Alejandro de la Sota is one of the great masters of modern Spanish architecture, designed ground-breaking buildings such as the Civil Government (Tarragona, 1957-1964) and the Maravillas School Gymnasium (Madrid, 1960-1962). In this compilation of his most important essays, he reflects on the legacy of the Modern Movement and its atypical implementation in the sad cultural panorama of Spain under the Franco regime. It can be read as a kind of chronicle of the evolution of Spanish architecture from the 1950s until the architect’s death. “One day I stopped working and tried to think freely about what I, and others as well, were doing. That very day I began to shake off many of the additions that embraced all serious thought about architecture, clinging to it like veritable limpets, crustaceans. I found the clean outcome attractive, and I thought it could also be called Architecture, or perhaps architecture. I enjoyed that lower-case a, which sufficed to resolve the issue that architecture has always had to resolve: the organisation of the world in which we live our lives.” 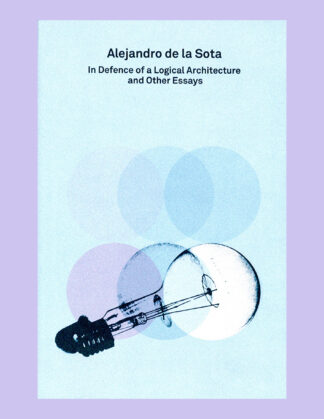 Je bekijkt nu: Alejandro de la Sota: In Defence of a Logical Architecture and Other Essays (2G Essays) €24,80
In winkelmand
0