On May 14, 1940, Otto Neurath and Marie Reidemeister fled from the harbour of Scheveningen in The Hague to England. It was the last boat that could escape from Holland before the German occupiers took the city. Years earlier, in 1934, they had fled the same danger from Vienna to Holland. Otto Neurath can be seen as the godfather of today’s infographics. In the Gesellschafts- und Wirtschaftsmuseum (Social & Economic Museum) that he founded in Vienna, developments in various areas of society were shown by means of pictorial statistics to a broad audience – rich and poor, literate and illiterate. At the Museum, Otto Neurath acted as the scientific director and inspirer, Marie Reidemeister as the ‘Transformer’ of data into sketches, and Gerd Arntz as the head of the graphics department which designed pictograms and layouts. These three continued that work in Holland under the acronym Isotype (International System Of TYpographic Picture Education).

After internment as ‘enemy aliens’ on the Isle of Man, Neurath & Reidemeister were able to continue their work in the UK. Through Wolfgang Foges and his book packaging firm Adprint, they were commissioned to design Isotype charts for books supported by the Ministry of Information during the war – what might be called ‘soft propaganda’. From 1942, Isotypes were supplied for information about the embryonic welfare state (Beveridge Plan), for illustrated books about Britain’s allies (USA and USSR), and on what British democracy should look like after the war.

This book illustrates around 250 Isotypes from these publications and provides information about the producers, authors, editors, and designers, and not least about the working relationship between the Isotype Institute and Adprint. The examples presented show the remarkable quality of the graphics, produced under less than ideal circumstances during wartime. 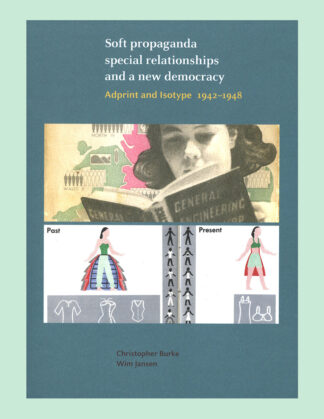