Andrea Branzi: E=mc². The Project in the Age of Relativity

From radical research to contemporary design, this book collects Andrea Branzi’s work about city-design and a new opportunity to interpret and anticipate the next dynamics of society. Territories that are conceptual categories, through spaces that are offered up by reality such that design can act and perform cognitively: in this sense, the city becomes a critical concept capable of overcoming its own image. Each passage presents a precise anthropological articulation: from the concept of commodity civilization of the Sixties to that of immateriality, from the concept of the metropolis to that of the anthropological territory, in which the infinitely small and the immensely large coincide, to the point of generating and passing beyond our commonly held concept of the city.

The publication begins from the Andrea Branzi’s reflection on the relationship civility-design, from the Radical’s research on mass-production civilization to the “infinite territories”, proposing new territories able to interpret and anticipate the new dynamics of society. In particular, if the first chapters review the historical/critical works of Andrea Branzi and of Radical Movement, the last opens a new parenthesis of research, right now never expressed: the issues ignored by Modernity, like life, death, destiny and the sacred: themes which underline the new drama and the fracture between tragedy and normality, between consumerism and death, between theology and technology, between the silence of reason and the voice of an irrational reality. 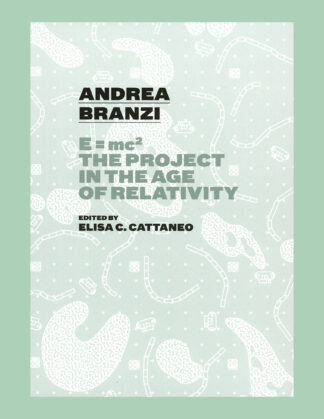 Je bekijkt nu: Andrea Branzi: E=mc². The Project in the Age of Relativity €55,00
In winkelmand
0