This fascinating publication is the first to examine side by side the careers and work of two of the biggest names in 20th-century fashion, Yves Saint Laurent (1936–2008) and Halston (1932–1990). Their designs — chic, sexy, and glamorous — came to exemplify the 1970s, a singular and dynamic era in fashion history. Inspired by menswear, foreign cultures, and wide-ranging historical periods, and employing new fabrics, YSL and Halston together crafted a new and distinctly modern way of dressing.
Moreover, although their output differed and they were based on different continents, the two designers shared many career parallels. A visual timeline of the designers’ lives illustrates how their rises and falls, from the 1950s to their respective struggles in the 1980s, were surprisingly in sync. Engaging passages by Patricia Mears and Emma McClendon discuss the social, cultural, and economic factors that influenced both designers, and their subsequent impact on fashion—including the rise of the star designer as personality, the cult of celebrity, and the creation of the fashion conglomerate. The authors also address the importance of color, cutting-edge materials, innovative construction techniques, accessories, and perfume to both designers’ aesthetics. Remarkable photographs of the designers and their garments round out this essential volume on two figures who made an indelible mark on fashion history. 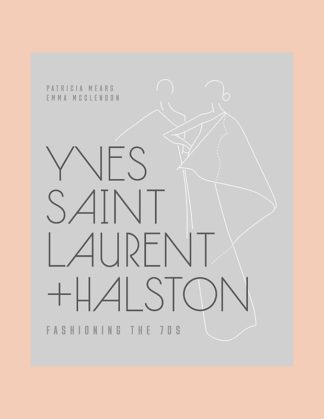