Landscape, John Stilgoe tells us, is a noun. From the old Frisian language (once spoken in coastal parts of the Netherlands and Germany), it meant shoveled land: landschop. Sixteenth-century Englishmen misheard or mispronounced this as landskep, which became landskip, then landscape, designating the surface of the earth shaped for human habitation. In What Is Landscape? Stilgoe maps the discovery of landscape by putting words to things, zeroing in on landscape’s essence but also leading sideways expeditions through such sources as children’s picture books, folklore, deeds, antique terminology, out-of-print dictionaries, and conversations with locals. (“What is that?” “Well, it’s not really a slough, not really, it’s a bayou . . .”) He offers a highly original, cogent, compact, gracefully written narrative lexicon of landscape as word, concept, and path to discoveries.

What Is Landscape? is an invitation to walk, to notice, to ask: to see a sandcastle with a pinwheel at the beach and think of Dutch windmills—icons of triumph, markers of territory won from the sea; to walk in the woods and be amused by the Elizabethans’ misuse of the Latin silvaticus (people of the woods) to coin the word savages; to see in a suburban front lawn a representation of the meadow of a medieval freehold. 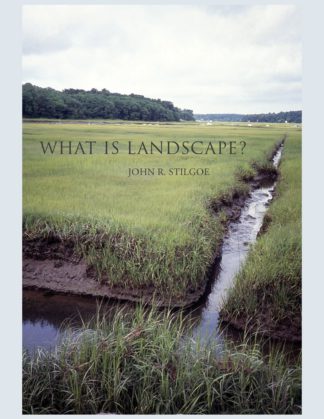