Kiosk, street lamp, litter bin, manhole cover – the architectural historian Lampugnani pays attention to seemingly meaningless objects. He tells their story(s) and explains why they are so important for the cityscape. How does one recognize in the picture of a street what kind of city it is, even if no well-known landmark is visible?
By the small but characteristic objects of the urban space: the fountains (Berliner Pumpen, Roman Nasone Fountains, Parisian Wallace Fountains), the tree discs, bollards, street furniture, but also by the pavement, sidewalk or manhole covers. Lampugnani looks at the history of these objects, has selected 22 representative ones and tells us about their development: starting with their first appearance (often already in antiquity), their neglect (mostly in the Middle Ages), their new blossoming or their first appearance (in the city of modern times) up to their dilapidation and ugliness in the present. Or it follows its short life like the telephone box, which, hardly invented, has already been pushed back by technical innovations.
What emerges are not only knowledgeable insights into previously underestimated elements of the city and amusing anecdotes from the history of urban planning and individual cities. En passant, Lampugnani also tells what makes a city beautiful, individual and unmistakable. And what we sometimes frivolously put at risk today. IN DUITS ! 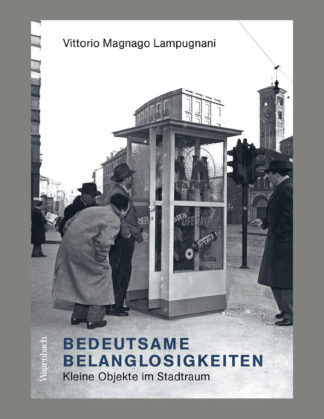